Essington RFC – Pitch up and Play

Players and Officials at Essington Rugby Club were proud and amazed on Saturday 12th September
at their “Pitch Up For Rugby Day” when the RFU Vice President Rob Briers walked in and introduced
himself.
He explained that the Presidents Management Team at the RFU had each selected a Club to visit on
the restart of Rugby in England following the Covid19 Lockdown that had had such an impact on
the whole country. Rob Briers had chosen Essington as an ideal Community Rugby Club as shown
by their generous donation of hundreds of pounds of Food for local Care Homes during the
Pandemic, and the enthusiastic support of members and friends of the Club in raising £5,790 in a
recent RFU Crowdfunding campaign, which was boosted by £5,000 from Sport England.
Mr Briers had driven all the way down from Lancashire to Essington to see the Club and thank
everyone present for their good work in the Essington local community. Rob was joined by Mike
Procter the Staffordshire Representative at Twickenham, who had driven down from Trentham.
Essington Chairman Simon Fletcher thanked the 2 distinguished visitors. He commented that Rob
Briers would be President of the RFU for the 2022/3 season and advised everyone present that Mr
Briers played at West Park St Helens, where he won 44 county caps for Lancashire. Winning the
national County Championship 3 times playing alongside England Legends Bill Beaumont and Fran
Cotton. Mr Briers also represented the North of England and England U23’s.
The “Pitch Up For Rugby Day” was a great success for
Essington, with 4 teams fielded and a number of new players recruited for their Mens Rugby Teams
and Mixed Touch Rugby Teams.
The weather was bright and sunny, it was good to be back at the Rugby Club for the first time since
March. A great day was had by all present. 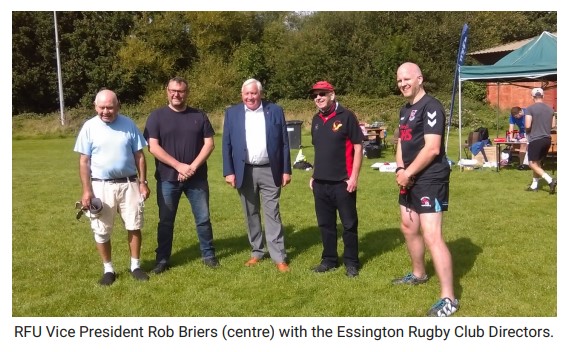