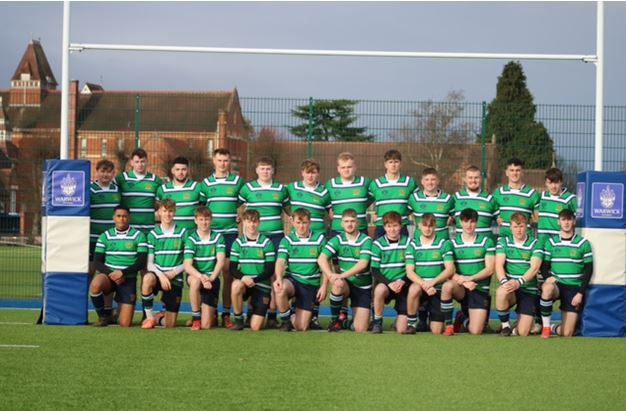 The third of the U18 Midlands games was a game against North Midlands at Warwick School on Sunday 9th January 2022.

The second half started with two tries from North Midlands at 2 min and 10 minute following continued pressure.  At 21 minutes Staffordshire scored an interception try from inside their half, a solo effort by Immanuel Shute whose speed and nimble footwork outwitted the opposition. The try was converted by Connor McCulloch.

North Midlands responded with continuing pressure and scored a further 2 tries at the 25 minutes and 35 minutes. Bringing the second half score to 20 points to 7 points, which represented a closer half than the first half.

The final score was 65 points to 7 points in North Midlands favour.

Staffordshire showed some great improvement in the forward set piece over the first 2 fixtures. The front row and scrum performance was much more stable and the line out performance much better retaining our possession and sometimes winning or disturbing the North Midlands ball.

The main difference between the sides was the speed to the breakdown and committing sufficient numbers to both retain and turnover possession, which in the first half North Midlands were excellent; with good distribution to an excellent back line resulted in the high points difference

In summary a game of Rugby played from start to finish in the true spirit of the game with North Midlands displaying some excellent skills and clearly a very good and together squad, however to Staffordshire’s Credit they never lost heart and every player dug in defended and attacked to the best of their ability as a squad and individual.

Staffordshire U18 players selected for the Midlands Development Squad

Staffordshire are please to confirm the following players have been selected to join the Midlands Development Squad.

The second of the U18 Midlands games was a game against East Midlands at Warwick School on Sunday 19th December 2021. The preparation for U18 was clearly hampered by a lack of a U17 programme last season due to Coronavirus restrictions. So after only 3 training/assessment evenings, Staffordshire’s 23 players put their best foot forward for the second time..

The first half commenced with pressure by Staffs in the East Midlands 22m, however this was not converted into points. East Midlands broke out and after a short time in Staffordshire’s 22m converted the pressure to points with a try after 11 minutes. Staffordshire again gained good field position but could not convert this into points after several good opportunities, East Midlands responded with a breakaway try from their 22m and scored at the 24minute point. Making the score 10 points to nil.

A few minutes after Ben Mead the Staffordshire right wing intercepted a pass and ran over half the length of the field to score near the posts, which was converted by Alex Goodyear. Bringing the score to a more representative 10 points to 7 points which remained the score until half time.

The second half started with a penalty after 4 minutes and a penalty conversion decision was taken, a good kick by Connor McCulloch hit the middle of the cross bar and bounced back into the field of play. Pressure continued in East Midlands 22m after 7 minutes into the half East Midlands made an excellent break away with good backing up which resulted in a try bringing the score to 15 points to 7 points. Some minutes later another breakaway occurred which was defused by an outstanding tackle from James Christopherson.

East Midlands continued to pressure, eventually Staffordshire moved the ball to Immanuel Shute on the wing whose speed, excellent lines of running and footwork took the ball just over Staffordshire’s 22m and ran the length of the field to score a very well executed try, bring the score to 15 points to 12 points after 14 minutes. Staffordshire nearly scored again after an excellent run from the other winger Jay Rosenbach.  The pressure in the East Midlands half was rewarded after 23 minutes by a try by Prop Sean Bullous converted by Connor McCulloch bringing the score to 15 points to 19 points.

The restart by East Midlands was a difficult kick into Staffordshire’s 22m which was knocked on, the result scrum and pressure by the East Midlands Forwards resulted in a try near the posts after 27 minutes which was converted bringing the score to 22 points to 19 points.

Seconds after the restart 2 of Staffordshire’s backs had an unfortunate collision in lose play and both required medical assistance on the pitch which brought the game to a premature end. Thankfully both players walked from the field to receive further medical treatment.

In summary a game of Rugby played from start to finish in the true spirit of the game with both sides well matched and displaying some excellent skills, however both sides made many simple errors which disrupted the flow of the game. The difference between the two sides, East Midlands capitalised on their opportunities and in the first half their forward’s set pieces were much more effective, Staffordshire’s backs again showed their flare and capability with ball in hand and distributed well to the flanks, looking consistently dangerous.

The start of the U18 Midlands games was a game against NLD at Warwick School on Sunday 5th December 2021.

The preparation for U18 was clearly hampered by a lack of a U17 programme last season due to Coronavirus restrictions. So after only 2 training/assessment evenings, Staffordshire’s 23 players put their best foot forward.

The performance as individuals and more importantly as a team given the limited preparation was a credit to all the players and coaches. Rarely has a team come together so well.

The backs from the start had a very fluid attack and provided an excellent defence. The forwards showed some lack of detail in the set pieces but pressed the game line when in possession and defended valiantly.

NLD proved a challenging opposition with some significant forward power and well-honed jackal skills and achieved a number of turnovers particularly in the first half.

Staffordshire started the first half with a try after forward pressure on the NLD line with Christian Bannister touching down, 5 minutes into the game. NLD responded with a similar try after 26 minutes. With the strong wind in NLD’s favour a well-positioned kick was followed up and a try scored after 32 minutes. The half time score Staffs 5 – NLD 10.

The second half again saw pressure from NLD in Staffs 22, which resulted in a try on the 43rd minute. Three minutes later NLD were pressurising, with the ball moving down the back line which was intercepted by Staffs right wing Ben Meads in the Staffs 22. He ran the length of the field to score a try near the posts which was easily converted by Connor McCulloch. Making the score Staffs 10 – NLD 15.

Both sides remained very committed, and the game moved from end to end. After 63 minutes a scrum in the middle of the field which NLD won the ball came out at the side, Joseph Coleman the Staffs scrum half stole the ball passed it to fly half James Milan who moved it wide to Ben Meads who ran robustly down the touchline to score a try making the score Staffs 17 – NLD 15.
NLD continue to pressurise the Staffs line and a passing move down the backline with intercepted by outside centre Immanuel Shute who ran the length of the field scoring near to the posts. The try was again converted by full back Connor McCulloch. Final score Staffordshire 24 points and NLD 15 points.