Paolo Odogwu, came from Sutton Coldfield and played for Walsall Rugby Football Club and attended King Edwards School, Birmingham. He played for Staffordshire U16’s in the 2012-13 season.
He was selected for a 16’s Midlands Trial and went onto represent the Midlands at the Divisional Festival and then was selected for England South at the Wellington Festival in April 2013.
In the Festival he played against France, Scotland and the USA, drawing against France and winning the latter two. 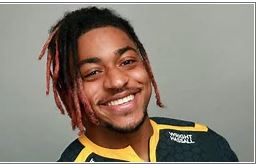 After the Festival he joined the Leicester Tigers Academy staying until 2016 when he was released and quickly snapped up by Sale Sharks scoring his first try for Sale against Tigers.

Paolo left Sale at the end of the 2018-19 season after spending 3 seasons at the club and making 29 first team appearances, signing for Coventry based club Wasps. He scored his first tries for the club in round 2 of the 2020-21 Premiership season against Gloucester; finding his way over the try-line twice in the last 2 minutes of the game to help Wasps to a try bonus point.

After some excellent form in late 2020 and early 2021 Odogwu earned his first man of the match award in a thrilling 44-52 victory away to Bath.

Paolo, who is of Nigerian and Italian descent, represented England under 18’s. He then played for England U20 in the 2016 Six Nations Under 20s Championship and came off the bench in the final of the 2017 World Rugby Under 20 Championship as England finished runners up to New Zealand

As of January 2021, he has yet to play internationally at test level but has been selected for the England Six Nations Squad this in 2021.

Paolo joins Dan Robson our other Staffordshire Player in the Six Nations Squad. Staffordshire Rugby wish to congratulate both Paolo and Dan for achieving this honour